Teaching Chewie to Communicate Back! 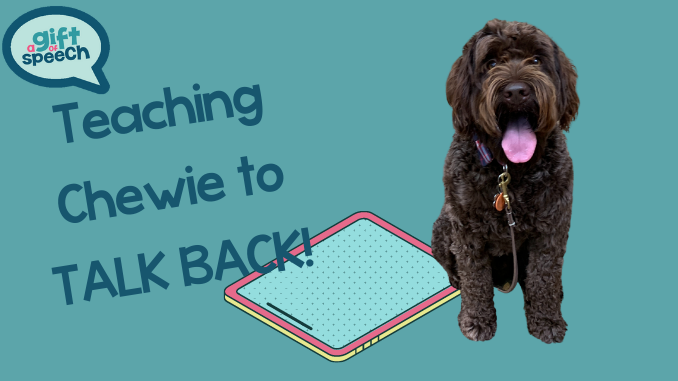 Have you seen some of the amazing dogs on Instagram who use buttons to talk? Me too and it is so amazing. I am an SLP that is passionate about AAC and supporting communication. Did you notice I said communicate and not talk? In a world where most of us communicate via speech, it is easy to think that talking = communicating. But there are so many different ways we can communicate with one another. Oh, I could write an entire post on the topic of non-verbal communication. But back to Chewie and his talker.

About bit ago I started the journey to teach Chewie to use buttons to communicate. Chewie is my labradoodle. He is currently almost 2 years old. I have been working with him since he was a puppy in the hopes that we will be a therapy dog team. We are almost there, so hopefully, I will be able to post soon that he is a certified therapy dog.

How we got started. I purchased some “recordable buttons” on Amazon. This is an outline of our first month.

So at this point, we have 2 buttons, eat and open door. One is by his treats and the other by the door. It cracks me up (kinda) when I hear him asking me to OPEN DOOR in the middle of the night.

What I am reminded is that we all learn at our own pace. Some of us learn things quickly with minimal practice and for others it takes many repetitions. So we are going to keep practicing and “Talking Back”